At more than 90 acres, Price Park is one of the bigger parks administered by Greensboro’s Parks & Recreation Department. It’s among five parks in the system that are termed regional parks, along with numerous (about 100) smaller neighborhood parks.  (Two other regional parks with birding potential, Country Park and Keeley Park, are described elsewhere in this guide.) What makes this one different is that the other four regional Greensboro parks are multiuse recreational and sports parks, whereas Price is actively managed to keep it as natural as possible in partnership with the Piedmont Land Conservancy. Both Piedmont Bird Club and T. Gilbert Pearson Audubon Society have conservation projects here. It’s a real gem situated in a suburban residential and business section of northwest Greensboro offering an oasis of nature for birds and other species.

Price Park is a great place to look for birds because of the variety of habitats in the park. As you enter the park, there is a small grassland and wooded area on the right. At one time birders called it the “meadowlark sanctuary” because it was large enough to attract that species, but meadowlarks haven’t been seen there for several years as trees have been planted on one end and brush has been allowed to grow. Still, the grassy portion may produce sparrows of several species. The local Audubon chapter, the T. Gilbert Pearson Audubon Society, partially funded the construction of a Chimney Swift roosting tower here. 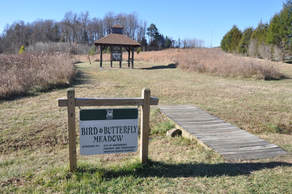 ​As the birder turns left to go up the little hill, the Bird & Butterfly Meadow sign may be seen on the right. This area, too, has been neglected and suffers from lack of management as funding and staffing for the parks system have been increasingly restricted. The naturalist interested in insects may find a few common butterflies and a small selection of dragonflies. Hopefully this site will be managed more actively for birds and butterflies in the future. On the left is a wet meadow that has been maintained for several years by volunteers from the local Audubon chapter. It's one of the best places in suburban Greensboro to find Red-winged Blackbirds as well as other birds associated with the tiny cattail marsh and wet meadow.

Farther up the hill is the Kathleen Clay Edwards Family (KCEF) Branch Library. In addition to more typical popular library collections, this facility is an environmental-focus library that has an extensive collection of environment, nature, and gardening resources. Of interest to birders, the T. Gilbert Pearson Audubon Society has donated binoculars and field guides that may be checked out by both children and adults. These often are used for outdoor nature programming around the library and in the adjacent woodland.

Meandering through the woods is a mile-long loop trail, the Evergreen Trail, which is used by individuals and groups for nature study. Periodically along the trail are interpretive signs funded by the Audubon chapter. The installation was coordinated by one of the chapter members to meet one of the requirements for her NC Environmental Educator Certification. In addition to this dirt loop trail, the 1-mile linear Price Park Greenway is a relatively straight paved walkway that runs approximately from Hobbs Rd. on the northeast to a fence in the southwest. It is hoped that one day this greenway will be linked to the city’s Bicentennial Greenway. One can enter the woods at several spots to link to the Evergreen Trail. 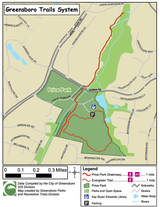 Click the image to open a site map in a new window.
A small creek parallels the greenway on the west side of the park. The creek banks have been replanted with native shrubs and trees. As this area matures, watch for birds along the creek. On the east side of the park are three small ponds, the largest of which is about 22 acres. In winter this is a good place to scan for waterfowl. The Evergreen Trail passes along a small branch creek on the return loop to the library. This is a beautiful place to pause among the beech trees and other species to watch and listen for birds. One of the smaller ponds, which has silted in and become more like a marsh, can be seen through the trees in winter.

To extend birding a little longer, the birder may walk north along the paved Price Park Greenway, cross Hobbs Rd., and continue north for a half-mile or so. On the right (east) is a lake and on the left is a retention pond for runoff from Jefferson Village shopping center. Both of these bodies of water attract waterfowl in winter, and typical Piedmont land birds all year. Be aware that this is a rougher section of the greenway outside the park. It was once paved but the pavement and surrounding vegetation often aren’t groomed. Still, it can be a fun walk.​