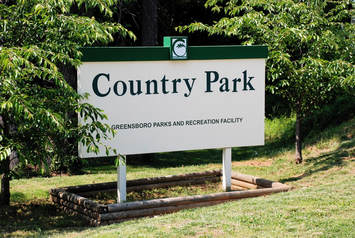 ​Hours of operation: ​Country Park opens daily at 8:00 a.m. The closing time varies with the season. In the cold season (November, December, January, and February) it closes at 5:00 p.m. In spring (March and April) it closes at 7:00 p.m. During the warm season (May through August) it closes at 8:00 p.m. In fall (September and October) it closes at 7:00 p.m. The park is closed on Thanksgiving Day and Christmas Day. The park is open to the public but closed to vehicles on weekdays from 4:15 p.m. to closing and all day on weekends and holidays. During these times birders may walk in and share the loop road with numerous walkers, joggers and bicyclists. This shouldn’t be a deterrent to birding, however, because it’s easy to step off the pavement and into the woods on trails and in picnic areas. ​ 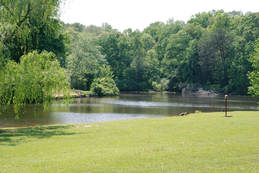 Greensboro’s Country Park is part of the Country Park/Guilford Battleground complex that comprises over 450 acres of typical northern Piedmont mixed deciduous oak-hickory woodland. What makes it special and of particular interest to birds (and birders) is that it is a large woodland oasis surrounded by urban and suburban development.

In 1934, the City of Greensboro created Country Park on 217 acres adjacent to Guilford Courthouse National Military Park, the site of a Revolutionary War battle. There is access between the two parks on trails, but there is no automotive access. Driving directions to the battleground park are elsewhere in this guide. Although dedicated primarily to recreation, Country Park today is still mostly wooded, has more than 6 miles of roads and trails, and also features two ponds. A science center is adjacent to the park.

As might be expected, the number and species of birds is affected by the number and activities of the park visitors. Midweek visits will be most productive. On a good day, a birder can expect to find most of the birds that are in the adjacent Guilford Courthouse National Military Park. In fact, it is possible to walk a short and well-maintained trail between the two sites. Measuring from the entrance on Lawndale, the trail is about .8 mile around the loop road.

Click the image to open a site map in a new window.
Two side-by-side stocked 6-acre fishing lakes host resident flocks of Mallards and Canada Geese. Interestingly, some winter waterfowl seem to show up fairly often here too, including Canvasback ducks for several years. Warblers migrate through in spring and fall. In summer, this is a reliable place where one might see and hear Fish Crows. Look for Brown Creepers and Yellow-bellied Sapsuckers in winter.
​
​Just before the park closes some evenings, a visitor might hear a Screech Owl or a Barred Owl, which apparently have been resident. It seems that they are attracted to the caged owls that are sometimes being rehabilitated at the science center zoo. The center usually closes at 5:00 p.m., but parking in the center parking lot on nights when activities are scheduled may allow the birder to hear an owl and also to participate in the many interesting nature programs at the center.

Birding in adjacent Guilford Courthouse National Military Park also can be good. See the entry in this guide for details.