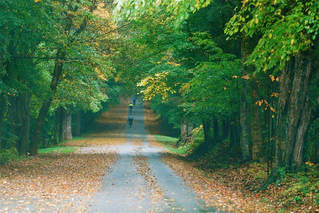 Guilford Courthouse National Military Park, known locally as "Guilford Battleground," contributes 220 acres to the Guilford Battleground/Country Park complex that comprises over 450 acres of typical northern Piedmont mixed deciduous oak-hickory woodland. Completing the complex for birding purposes is the adjacent large City-operated cemetery, Forest Lawn, which is both traditionally landscaped and partially wooded. Cumulatively, this creates a forest oasis for wildlife in the middle of suburban and commercial development.

In addition to its natural value as good woodland bird habitat, the area is of significance in American history. In the battleground area, American Major General Nathaniel Greene, for whom the city of Greensboro is named, led a group of almost 4,500 American militia and Continental soldiers against 1,900 troops of the British General, Charles, Second Earl Cornwallis, in 1781. Dubbed "The Battle of Guilford Courthouse," this engagement was a technical victory for the British when Greene chose to withdraw his forces, but the battle so weakened Cornwallis’ army that it is credited with being the turning point that led to the surrender at Yorktown and final victory for the United States.

In the parking lot the birder has a decision to make: walk or drive. A system of 4 miles of trails begins here that will allow a person to walk through dense woodlands and along wood’s edge, and through a shrubby field. As an alternative, the birder can begin a 2.4-mile one-way auto tour loop road that follows a circuitous route around the outer edge of most of the property, stopping frequently to look and listen for birds.

Of course, the serious birder actually can do both. There are seven paved pull-offs along the auto tour road where a person may park and walk the trails in that vicinity. If you choose the auto tour, drive carefully and obey the parking signs; the road crosses a busy street and is heavily used by walkers, joggers, and bicyclists, even in early morning and late evening when birding is best.

Click the image to open a site map in a new window.
Birding in the battleground can be good at any time of the year. A leisurely drive through the park on a nice late spring or early summer afternoon is almost sure to be accompanied by the songs of Wood Thrushes echoing in the forest. Nearly all of the eastern woodpeckers have been seen here, and Pileated Woodpeckers have nested here. Carolina Wrens, Brown Thrashers, Gray Catbirds, and Eastern Towhees inhabit the underbrush.

In winter, flocks of Dark-eyed Juncos join White-throated Sparrows in the leaf litter. At any time of year, American Crows can be seen and heard calling; it is possible in summer to hear an occasional Fish Crow. Birding in adjacent Country Park also can be good. See the entry in this guide for details.​