The Richardson-Taylor Preserve was the first of several relatively new county nature preserves to be opened to the public. It was officially opened on May 25, 2013. It is one of about fourteen properties that were acquired and protected as nature preserves by the now-defunct Guilford County Open Space Program with bond money set aside for the purpose by county citizens in 2004. It is located on the northern edge of Greensboro just west of Lake Townsend.

This is a large preserve, about 440 acres, and is composed primarily of mature forest and beaver marshes. There are about 4 miles of trails, a portion of which is slated to be part of the Mountains-to-Sea Trail. According to the original trail plan, eventually the preserve will be linked to Haw River State Park, although there is no time frame for this. 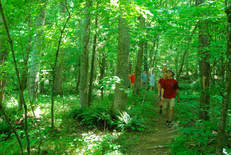 This preserve is designated as a “passive use park.” It is mostly undeveloped and has no facilities such as restrooms or water fountains except a partially paved parking lot with an information kiosk on Plainfield Road. Two nice features have been built, however: a Girl Scout coordinated the building of an outdoor classroom with benches and a podium for her Gold Award, and a Boy Scout had a wildlife-viewing platform built at the edge of the marsh for his Eagle Scout project.

​​Although a case could be made that the best feature of this preserve is the view of the marsh, a walk in the woods is fun any time of the year. Because of the mature woods, the numbers of bird species is limited to woodland interior species. Spring migrants move through, where they’re easier to see along the woodland edges. In summer seeing birds can be difficult but a birder can hear the beautiful song of Wood Thrush and the squeaky-toy call of Brown-headed Nuthatches. Red-eyed Vireos are common and Great-crested Flycatchers call from the high trees. Spring is a great time to look for the many native wildflowers of the preserve, as well. 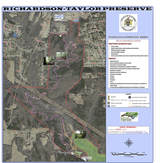 Click the image to open a site map in a new window.
The marsh, which is created by Long Branch that feeds the marsh and ultimately into Lake Townsend, is good for birding all year. This is one of the best sites in Guilford County for Red-headed Woodpeckers. Raptors can be seen or heard all year; Broad-winged Hawks, American Kestrel and an occasional Osprey in summer, Red-tailed, Red-shouldered, and Cooper’s Hawk all year. Birders come here for ducks in winter, both here and about a mile farther east from the marsh overlook on Plainfield Road. Watch for Wood Ducks, in particular. On at least two occasions birders have found American Bitterns in migration. Summer also is a good time to see and hear Red-winged Blackbirds, and Belted Kingfishers are around all year. Great Blue Herons are here all year and are joined in summer by Green Herons and in late summer by Great Egrets.​