Formerly administered by the City of Greensboro Parks & Recreation Department, Hagan-Stone Park now is part of the Guilford County parks system. It is named to honor local conservationists Ann Hagan and Joseph Stone.

The park is developed for a variety of sports and outdoor recreation activities, but a large portion of it has been preserved for wildlife. There are more than 8 miles of designated hiking/nature trails that cover most of the park. Some of the trails are open to mountain bike enthusiasts at least part of the year. Birders also should be aware that the park hosts cross country meets, as well as 5K and 10K runs so some of the trails may not be accessible on a given day. In addition to the trails, there are four small lakes and a nice campground in the park that should be checked for birds.

Birding around the two lakes nearest the entrance is often interesting. Red-shouldered Hawks have nested several times near the lakes, which also attract interesting waterfowl. The largest of the park’s lakes, on the right (east) side of the entry road, has hosted Hooded Mergansers and even Canvasbacks in winter. Anglers have created a rough path around the lake on the left (west) side of the road that may be walked to find Downy Woodpecker, White-breasted Nuthatch, Carolina Wren, Tufted Titmouse, and Carolina Chickadee. In summer watch for Eastern Phoebes competing for insects with Northern Rough-winged, Barn and Tree Swallows over the lake. 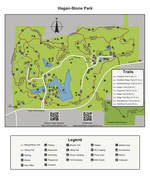 Click the image to open a site map in a new window.
One of the best areas in the park for birding is around the fishing pond designated as Lake #1 behind shelter #5 at the far western edge of the park. In early spring, Common Snipe have been heard at dusk in their mating flight. Both Indigo Buntings and Blue Grosbeaks sometimes are in the brushy field, and Pine Warblers, Chipping Sparrows, and Brown-headed Nuthatches are in the pines next to the parking lot. Gray Catbirds and Brown Thrashers make their home in the tangle of shrubs around the shelter and by the lake. Lake #4 near the Schoolhouse Trail near the center of the park isn’t quite as good for birds, but it’s a great place to practice one’s skills identifying dragonflies.

​At over 400 acres, the park is large enough that a birder could spend the whole day exploring the trails and around the ponds. This would be a good place to bring beginning birders and kids because of the park’s easy terrain and amenities, including restrooms, water fountains and picnic tables.​