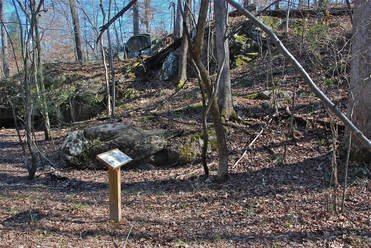 At about 20 acres, the Bold Moon Preserve is one of the smaller preserves that were acquired by the now defunct Guilford County Open Space Committee using bond money that was earmarked for that purpose. (The preserve name was chosen by the previous owner.) It is located in the northeast sector of Guilford County near the town of McLeansville. Although recreational activities had occurred in the preserve for several years, the official opening of the preserve was held by county staff in October 2015.

Birding and other wildlife viewing, photography, hiking, picnicking, geo-caching, and fishing (with license) are among some of the recreational opportunities here. While no unusual bird species have been recorded here, typical upper Piedmont woodland species may be found here.

An interesting historical feature of the preserve is the remnant of a wagon road that is purported to be part of an early postal route in the area. A trail follows the old road depression north through the woods to a shallow ford across Reedy Fork Creek where the wagons would have crossed. This is a scenic area. Near the ford is an outcropping of boulders, unusual for this part of the county, that support interesting ferns and other plants. At the base of the rocks are several vernal pools that host salamanders. 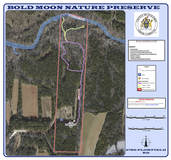 Click the image to open a site map in a new window.
The Piedmont Plateau (Guilford County) Chapter of the Sierra Club adopted this preserve shortly after it was acquired by the county and has placed several interpretive signs along the trail to the Reedy Fork Creek. Near the parking area there is a small meadow and a few indications that this was once a working farm.

​Currently, there are no facilities in this preserve, so visitors should bring water and prepare accordingly. Also be aware that this preserve is relatively remote and rarely visited, so personal safety should be considered. While there are no obvious dangers and there is no history of problems, it might be best to go with a companion and/or let family and friends know where you’ll be.​