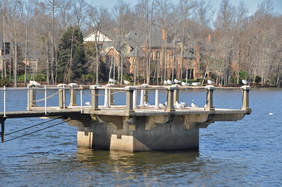 Buffalo Lake, a private impoundment, attracts several species of diving ducks in winter so may be a good site to begin or end a tour of the Greensboro lakes. It’s also worth a stop if a travelling birder happens to be passing by on other business. From US 29, take the Cone Boulevardexit and go east. It is just past the Church Street intersection.

Buffalo Lake is a reservoir south of the City of Greensboro lakes. It once served as a water source for a textile mill, and an old structure from that era still exists at the east end. In modern times there are now several gated communities surrounding much of the north side of lake, so those areas aren’t accessible to birders. On the northeast end on Henry Street and eastern edge on St. Jude Street are a few businesses, mostly medical offices. Although a restaurant building stands at the southeast end next to the lake, at the time of this writing it is closed. There are no facilities or services at the lake itself, but stores and gas stations are nearby. 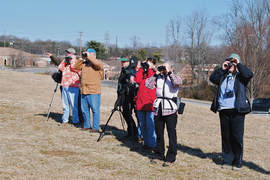 It is possible to walk west from the old restaurant along the south shore of Buffalo Lake on an informal angler’s trail, although it is rough in spots. Usually this isn’t necessary because most of the lake and small coves can be seen from the vantage point of the dam.

Over the years, many species of waterfowl have been spotted here in late fall and winter. Double-crested Cormorants, Pied-billed Grebes, Buffleheads, and Ruddy Ducks often are common. At the north end of the dam where the water is shallow, Northern Shovelers and other dabbling ducks sometimes are seen. There almost always are several Great Blue Herons along the shore.​