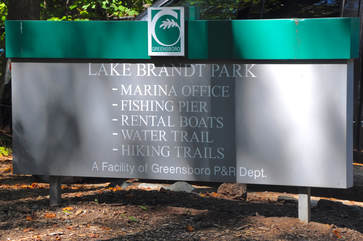 Hours of operation: ​ Lake Brandt Marina is closed on Tuesdays, and on Thanksgiving Day, Christmas Eve, Christmas Day, and New Year’s Day. The marina opens at 7:00 a.m. except on Sundays when it opens at 8:00 a.m. It closes between 7:00 p.m. and 8:00 p.m., depending on the month, except that it closes at 5:00 p.m. in November through February. Check with the marina office for exact closing times. 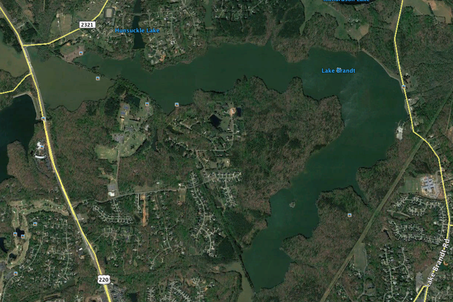 Lake Brandt, a large boomerang-shaped body of water, is the second largest Greensboro municipal reservoir at 816 acres, and is the oldest, having been built originally in 1925. It is approximately 2.5 miles north of the city. For information about hours, programs, and services, call 336-545-5333, or contact the marina directly at the phone numbers listed above. For watershed trails information, go to https://www.greensboro-nc.gov/departments/parks-recreation/trails-greenways/hiking-trails or call 336-373-3816.

Not much of this large lake is directly accessible by road. However, a system of trails that borders most of the lakes also gives access to for hikers. The southwest end of Lake Brandt is accessible by entering Bur-Mil Park, which is described elsewhere in this guide. A birder may park near the wildlife center in the park and walk north to the lake. The primary birding site is the marina on the east side of the lake, but a short walk on a trail from Strawberry Road gives good access to the western end near the western-most Greensboro reservoir, Lake Higgins. Consequently, we’ll begin our directions there.
​
Strawberry Road Access

Travel north on US 220/Battleground Avenue 0.2 mile past Hamburg Mill Road to Strawberry Road. (If you’re coming from Lake Higgins Marina on Hamburg Mill Rd. you’ll need to turn right, go a short distance to the turn-around at Leadership Place and make a legal U-turn, then head north again to the next traffic light.) Turn right (east) at the traffic light, go 0.3 mile, and park on the right in the well-marked unpaved parking lot. The sign will indicate that this is an access to a part of the trail system now known the A&Y Greenway, set to be part of the Mountains-to-Sea Trail in the North Carolina Trail System.
​Before proceeding on the trail, it is worth exploring the marshy areas near the parking lot. Immediately to the right of the parking lot is a small marshy inlet surrounded by dense shrubs and small trees that often produces interesting birds. Across the road is a wet woodland. One strategy is to walk back toward the US 220 intersection from the parking lot, checking the trees, undergrowth, and mudflats for birds, and then crossing the road to walk back on the other side. One may find Wood Ducks, Green Herons, warblers during migration, and a variety of small passerines. A wooden footbridge crosses the creek here and the trail continues north for a few hundred yards. At the time of this writing, it is a dead end so hikers will have to retrace their steps. In the future it will connect with a larger trail system.

Return to the parking area and enter the A&Y Greenway. The trail, which usually is kept mowed and relatively clear, passes through a field overgrown with shrubs and dense kudzu vines. In about 200 yards it forks, and one arm veers to the left to become the Piedmont Trail, a nice 3 mile (one way) hike along the north shore of the lake through overgrown fields and woodlands, eventually terminating at Lake Brandt Road. However, for this tour, continue straight ahead. Before long, you will realize that you’re on a causeway heading toward a footbridge that crosses the lake. In summer, keep an eye and an ear out for Eastern Towhees and Yellow-breasted Chats, as well as several species of sparrows. Great Blue Herons frequent the shallows on the left all year, and Great Egrets sometimes can be found here in late summer. Watch for a Bald Eagle and other raptors soaring overhead. In fall and winter a few ducks, grebes and loons as well as gulls and terns may be seen in the water or flying by.

Continue across the footbridge (actually an old railroad trestle) and along the trail as far as you want to walk. On the south shore the trail enters Bur-Mil Park, and at the fishing pier it forks. The left fork is the Owl’s Roost Trail (5.2 miles), which continues east along the south shore of the lake and then around the shore of a peninsula back south again and ultimately ends on Old Battleground Road. The right fork continues as the A&Yadkin Greenway. It goes through the park and eventually joins the Owl’s Roost Trail. These are not loop trails, so when you have walked as much as you want to, turn around and return to your vehicle on Strawberry Road to continue the tour.

Upon reaching Lake Brandt, it is worth the time to pause and check the area on and around the dam and spillway which are just 0.3 mile from the entrance to the marina. Parking is available outside the entrance to the marina, at the trailhead of the Laurel Bluff Trail next to the water pumping station 0.1 mile from the marina entrance, and at a gravel pull-off on the north side of the spillway. In winter, the dam is a favorite perch for gulls, including Bonaparte’s as well as ringed-bills, and gulls can be seen soaring at rather low altitudes over the area. Occasionally American Pipits have been spotted on the grassy slope beside the dam. The spillway attracts Canada Geese, Mallards, Great Blue Herons, and in late summer, Great Egrets and an occasional Snowy Egret. The mowed field on the north side of the spillway should be checked for Killdeer, flocks of blackbirds, and in summer Eastern Phoebes, Barn Swallows, and Tree Swallows. You might even see the resident groundhog.
​

The marina is on the west side of Lake Brandt Road about 2.4 miles south of NC 150. In addition to the approach from the Strawberry Road Access described above, one may reach the marina from I-40/I-85 by taking the US 29 to the Wendover Avenue exit east or from I-40 to the west. Exit Wendover Avenue at Battleground/Westover Terrace exit and drive north to Lawndale Avenue. Watch the signs closely because getting on Lawndale may be tricky. Veer right on Lawndale and continue north to Lake Brandt Road, then on to the marina entrance.

The marina offers water, snack machines, and toilets. If the marina gate is closed, one may park outside the fence in a gravel parking area and walk into the property along a trail to the left of the gate. The marina building is situated on a hill so that the birder may look west and southwest down the two arms of the boomerang shaped lake. There is also a dock and a separate boat launching area from which the lake may be scanned. In summer Purple Martins occupy the nest boxes on a pole near the boat launch area.

Early in the day before anglers get their boats in the water usually will produce the most birds, although sundown also can be good. When the marina gate is closed, there should be no boats on the lake to disturb the birds. Double-crested Cormorants and Pied-billed Grebes are common off the boat dock in the colder months, and occasional Eared Grebes can be seen. Canada Geese almost always loaf around the boat dock and in the southern (left-hand) arm of the lake. Late fall and winter usually provide a good list of waterfowl. Ruddy Ducks and Pied-billed Grebes often are in the water just below the dam on the north side. Lesser Scaup and Ring-necked Ducks are not uncommon. Ring-billed and Bonaparte’s Gulls are attracted to the dam, and sometimes large rafts of gulls may be seen far out the on northern arm of the lake. In some years, a Bald Eagle may be seen perched or soaring along the northern (right-hand) arm of the lake.

One may explore the lake by rowboat or canoe, which can be rented at the marina, or by private boat for a modest launch fee. The Nat Greene Trail (3.2 miles) begins outside the marina gate and traverses the eastern shore of one arm of the lake and follows a creek through hardwood forest. In addition to typical woodland birds, there are several spots along the creek that develop into shallow water and mudflats that can be quite good for shorebirds in autumn and dabbling ducks in winter. The trail features a 200-foot boardwalk near the termination point at Old Battleground Road. Keep in mind that this is not a loop trail.

After birding the Lake Brandt Marina, return to the entrance. To return to the city of Greensboro, turn right (south). To continue birding around the lake, you have a couple of choices. Trosper Pond is to the right just a little over a mile away, and Plainfield Road with the Richardson-Taylor Nature Preserve and Plainfield Marsh is to the left (north).