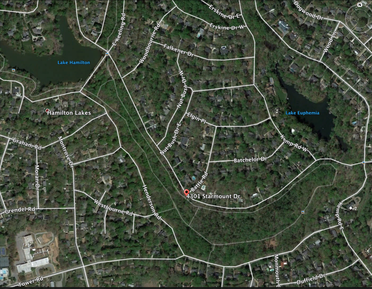 Hamilton Lakes Park is located in a residential neighborhood south of Friendly Avenue and just west of Holden Road. It is one of the many neighborhood parks that are administered by the City of Greensboro Parks & Recreation Department. For a neighborhood park it is quite large, more than 60 acres. It is one of the best places in the county to go birding, but birders must be particularly cautious about being good guests because parking is limited and it’s heavily used by neighborhood residents for walking and jogging.

The park follows the route of a sewer line and creek through several long blocks in the neighborhood. Most of its length consists of tall mature trees with a thick understory of smaller trees and shrubs. The park has about 2 miles of trails. An unpaved path runs down the center, and forms a loop by connecting at each end with a paved sidewalk that parallels Madison on the north side of the park. At the west end is a private lake that can be viewed from the slight rise of the dam on Keeling Road. The lake itself is posted for the use of neighborhood residents only. 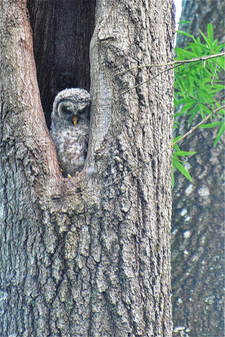 The park is rich with warblers and other neotropical migrants in spring and fall. Nearly every warbler species recorded for the county can be seen here, and on some days the warbler numbers can be spectacular. Even on bad birding days, there is usually something to see in spring. The park and surrounding neighborhood have hosted a good selection of nesting raptors in summer including Great Horned, Barred Owls and Eastern Screech-Owls, and Red-shouldered and Broad-winged Hawks. Swainson’s Thrush can be found in spring, Wood Thrush in summer, and Hermit Thrush in winter. The forest provides good habitat for the common Piedmont woodland birds such as Downy Woodpecker, Carolina Wren, Tufted Titmouse, White-breasted Nuthatch, and Carolina Chickadee.

The small lake at the west end of the park is home to white barnyard ducks, Mallards, and feral Canada Geese. There are Wood Duck nesting boxes scattered around the wooded shore and shallow west end, and it is possible to spot one of these ducks occasionally along with Great Blue and Green Herons. In winter there usually are a few Ring-necked Ducks and Pied-billed Grebes in the lake. Rarely, other waterfowl show up including a Red-necked Phalarope one winter!

The Bog Garden, described elsewhere in this guide, is near Hamilton Lakes Park and would be a nice additional stop if you wish to continue birding.​